A little tutorial on the Select2 JQUERY Plugin with a BASIC AJAX response via a PHP script.

On a recent project I was looking for an autocomplete jquery plugin that acts like a select box. The reason i need it as a select box is to prevent incorrect data choice. At first i was running the great jquery-ui plugins and using the autocomplete via a text box and retrieving data via ajax and json.
However I soon discovered that my clients could type data in the textbox and if the answer was not on the autoselect it added the text they have typed. Now when trying to search through a database for results this caused me a bit of a headache. So I plodded over to Google and looked for an alternative.

I understand that the Jquery-UI version has a bind method for select but it just seemed a bit messy and the coding was not the easiest to follow.

Next I found a great plugin called chosen : http://harvesthq.github.com/chosen/ and this was an excellent plugin. The only problem I had was loading the data via ajax for a keypress. For my particular project I had 68000 titles in a database I needed to search. Now that makes for a large select option list.
So I plodded back onto Google and found a link via Stack-Exchange for a plugin called Select2.

So I thought I would give this a go… Only issue was the ajax example was not easy to follow as they have used an advanced options to retrieve data from rotten tomatoes.
But this was the plugin I wanted. I found some help here : http://it.toolbox.com/blogs/rymoore/select2-jquery-select-boxes-54810 with the easy ajax answer.

I am writing this post to show you how to use php to send the json back to the ajax request.

Should produce similar to this :

Notice that because I am using ajax to get the result the field has to be hidden.
The name is the used as usual to send the value through the form.
The data-placeholder appears as the select box placeholder.

Now I added the following jquery :

The option I have set is minimumInputLength: 2,

So the PHP script (optionlist.php) is a mysql query on a database to get a json string back.
The select2 plugin looks for the ajax to appear as : [{“id”:”blah”,”text”:”blah text”},{“id”:”blah2″,”text”:”Blah2 text”}]
This will show the text in the select box and the value of the input will be the id..
so if it was enetered as a standard select box :

Now for the magical PHP script.
I am using pdo with a prepared statement for added security.
I am not going to show connection process.

The end result should look similar to this: 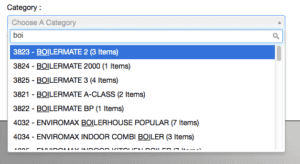 How advanced you make the MySQL query is entirely down to you. In my picture I join the MySQL with a products database with a count to give me back the amount of items shown.

Please feel free to drop me a comment if you spot a mistake or you have any comments or suggestions.

There is now a newer version of the Select 2 plugin available. This is V4 at present. They have altered the way the ajax works so this tutorial will not work with this version.
View an updated tutorial for Select2 Version 4.

Contact DSM Design for your development solutions. Use our online form or call us on 01202 048079.

When it comes to redesigning your website, there are a few...

You’ve just created a new website for your business and are...

Social media has made a huge impact on businesses more than...

Whether you wish to target a local audience or expand your...

View All Articles
We use cookies to ensure that we give you the best experience on our website. If you continue to use this site we will assume that you are happy with it.AcceptPrivacy Policy